“Ready Player One” wasn’t only directed by wizened whiz-director, Steven Spielberg; it also featured an organic creative process by way of the original author, Ernest Cline, who wrote the screenplay adaption of his beloved sci-fi adventure, along with veteran scribe Zak Penn. It appears that Cline was forced to make some compromises during his journey of bringing “Ready Player One” to the big screen.

The music in the film doesn’t reflect the obsessive admiration that the character of Halliday, the super-wealthy creator of the oasis, had expressed as his favorite band, specifically the group Rush. They didn’t use this important artifact or interest of Holliday’s to advance the hunt.

Ernest Cline may have helped buffer or subdue any fan feelings of the film being a poor adaption of the sci-fi novel. By co-writing the film with Penn, Cline takes responsibility for sculpting a script that he feels best encompasses the novel’s overall story, filled with cultural nods spanning back 50 or so years.

The mind-blowing exploration of living and speaking while acting scenes out as the host of a fictional movie character was an exciting part of the book that i would’ve liked to have been able to experience on the big screen. In particular, the book puts a lot of emphasis on Matthew Broderick’s character from the 80s classic film, WarGames, though it never ended up coming to fruition.

Whether or not it’s omission was due to technical limitations or the desire for more narrative clarity, it’s certainly a loss. It was an aspect of the book that was excitingly thought-provoking. There was some pretty high quality CGI effects  used in creating a much younger Kurt Douglass for “Ant-man”; one would imagine that the “Ready Player One” producers could’ve given it a shot.

But, alas, they stuck to a formula that works fine for mainstream audiences but yet doesn’t challenge the industry in either a technical manner or through their patterned, oft-repeated modes of storytelling. All in all, the movie is a fairly flaccid semi-analysis of the modern digital landscape.

I read an excellent analysis of “Ready Player One” that dissects the repeated attitudes regarding young internet entrepreneurs and their desire to remain perpetually innocent, despite the fact that their companies are quickly becoming massive social and economic powerhouses. Very similar to the character traits of Holliday, who Mark Rylance plays as a hesitant, socially awkward, and very isolated human being tracking back to his childhood. 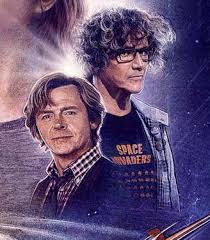 The attitude of creating something and then falling back on the nostalgia of working cheaply in compact family garages to build scrappy computers and change the world. But then once they’ve effectively altered the world forever, they fall back on their innocent intent to help the world and spread their honest, beloved creation, which, in this case, is the oasis.

It could also apply to Facebook’s Mark Zuckerberg and many other young tech millionaires/billionaires. Simply because a tech prodigy didn’t intend to harm others with their software, apps, or other inventions, doesn’t mean that they shouldn’t help create a balance and a safer environment for all of us to browse the internet without the constant fear or concern over the safety of our personal privacy and data.

The characters are well played with strong gusto and energy, particularly the young group of enthusiastic gunters. The Parzival-Art3mis relationship had an emotional impact and appeared to be molded by genuine emotion, but their will always be complaints regarding the appearance of Art3mis in particular.

We meet Parzival early on – he’s the protagonist, the tourist for the film’s ample universe. But in the novel, Art3mis had shielded her actual appearance from him in fear of not being physically attractive enough in reality.

Other than a benign-looking birthmark on her face, she didn’t have any shocking or standout characteristics. It wasn’t a catfish story at all. The actress playing Art3mis, Olivia Cooke, is very, very pretty by all measures. But a blockbuster sci-fi film can’t really linger off into subversiveness and truly tackle some of the most complicated issues (?) of the modern internet world. It was just a regular old love story and I didn’t not like it.

The big bad, played by the deliciously sinister Ben Mendelsohn, who has acted the part of a scummy business man or greedy opportunist to great success in his last few films (particularly as Orson Krennic in “Rogue One”). He’s the unskilled partner out of the trio of former friends: Halliday, Morrow, and Sorrento.

Sorrento was never respected for his mental capabilities, often only serving up coffee and running errands for the busy minds behind the project – Morrow and, mostly, Holliday. He wants to reign in all of the clues and gain the fortune that his “friend” so devilishly left him out of. He maniacally chases after his goal for boundless power and fortune. It’s very entertaining to watch him chew up each scene he’s involved in.

The final battle is thrilling and entertaining in its scope and spectacle, but it doesn’t quiet reach the frantic heights that the novel set as the standard. The cultural nods are more modern and less related to the character of Holliday and his interests. As a character, Holliday is pretty one-dimensional. A lonely kid turned into a socially-awkward programmer and inventor. His story, the story of his childhood interests and his passions – that was the story of the book. Chasing after the empty memories and gems of Holliday’s past life.

“Ready Player One” was, essentially, an entertaining and diverting adventure through the spectacularly realized world of the oasis. it’s not the same cultural artifact that the book is – it doesn’t explore or expand on any of the very original, unique remixes of past stories and games.

It takes the basic story and accepts that its limitations are one of the best qualities about it, allowing director Steven Spielberg to sculpt the narrative by his own means. The adventure is enough, even if the journey itself doesn’t hit as many clever cultural speed-bumps as a fan of the novel may have hoped for.

Ready Player One articles that I enjoyed: