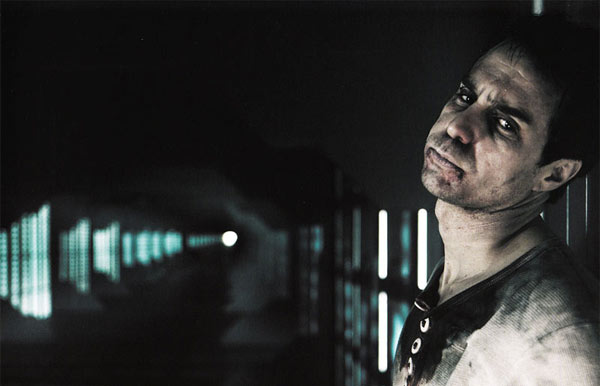 Director Duncan Jones’ debut film, “Moon” is a movie reflective of its five-million dollar budget: It’s smart, tenderly thoughtful, and provocative. Why is it that the two-hundred million films are always the worst? The director is the son of David Bowie, but also has a degree in philosophy and it is shown with gratitude here; “Moon” with its phlegmatic interior and the character’s calculated schedules undoubtedly bears resemblance or ‘ode’ to Stanley Kubrick and 2001: A Space Odyssey, at least in my mind.

The film centers around a single man, lost in space with sporadic duties of maintaining America’s moon base. At the beginning, a corporate-product advertisement of solar energy is shown, seeming to throw off an aroma of “even in clean energy, their still remains the same old manipulative rags.” Breaking down craters with large manufacturing machines and clearing the way for  solar power: alone in the desolate grey of the moon, Sam Bell, played wonderfully by Sam Rockwell, supplies solar energy to the citizens of earth.

The film takes a twist from this seemingly well-off business, when Sam Bell finds a space-suit beneath in the crevices of the space-hull, frosted-over. The man is put into the medical ward, with the advanced technology handling the healing procedures, just like when Sam Bell woke up from the crash, when he had been distracted from his own distant memories. When the man fully heals, Sam finds that he looks exactly the same as himself. This then starts the movie, the point of action, and the climax.

The dialogue between the two is at times funny, but at times also devastating to watch. They are looking at themselves, and all the known and irrefutable truths about the individual are destroyed for each other. Without the recognition of oneself, you have no sense of responsibility: Why should I act good, when my twin, with the same memories and body, acts bad? Their isn’t a line that can be drawn to distinguish people  and their innate human idea that they are unique. It is, when we break things down, the leading force of our continuing existence: Would you want to accomplish things if it didn’t represent a single thing, you?

Moon meditates on such large subjects as immoral responsibility, corporate greed, and existential pointlessness. The film is a stark, melancholy and absolutely beautiful photo-book of realistic Moon and space images: a must-see film, especially on HD blu-ray.